History of the Basilica

The reconstruction of San Lorenzo

Nothing of this initial construction seems to have come down to us; the imposing basilica that we admire today is the result of the radical renovation begun in 1418 by Giovanni di Bicci, founder of the Medici family who entrusted the reconstruction of San Lorenzo to Filippo Brunelleschi who directed the large construction site until his death in 1446.

The project was completed by his biographer and heir Antonio Manetti in 1461 and, despite some eighteenth and nineteenth century interventions, the Basilica of San Lorenzo still retains today the melodious vastness and the sense of perfect harmony that Brunelleschi had wanted to instill in it by virtue of the precise proportional ratios that regulate its structures.

The completion of the facade

During its long history, the Laurentian Medici Complex was separated in its management into the complex of the Basilica, the Medici Library and the Medici Chapels.

More about the complex

founded during the 4th century, it faints and is consecrated as a city cathedral to the martyr Lorenzo in the presence of Saint Ambrose.

after having been the cathedral of Florence for 300 years, it was enlarged and rededicated for the first time and was endowed with a chapter of canons.

the prior Matteo Dolfini celebrated a solemn ceremony to bless the start of the work entrusted to Filippo Brunelleschi.

Complex of the Basilica of San Lorenzo,
what to visit

The main cloister of the basilica takes its name from the Canons of San Lorenzo who, since the foundation of the church, have been charged with guaranteeing the daily liturgy and ensuring the care of souls.

Its current appearance is due to Antonio Manetti, a pupil and successor of Brunelleschi, who renovated it between 1457 and 1462, probably based on a previous project by Michelozzo, Cosimo il Vecchio’s trusted architect.

Large and harmonious, the cloister is divided into two orders supported by elegant Ionic columns: the lower loggia, higher and airier, has round arches, while the upper one is architraved.

All around it once faced the houses of the canons and the prior and the spaces dedicated to common life, such as the kitchen, the refectory and the chapter room: even today we can see above the doors the letters of the alphabet that distinguished the accommodations.

The smaller cloister, probably dating back to the end of the fourteenth century, represents the oldest part of the monumental complex, the only one that has preserved the characteristics of the Pre-Brunelleschi construction. 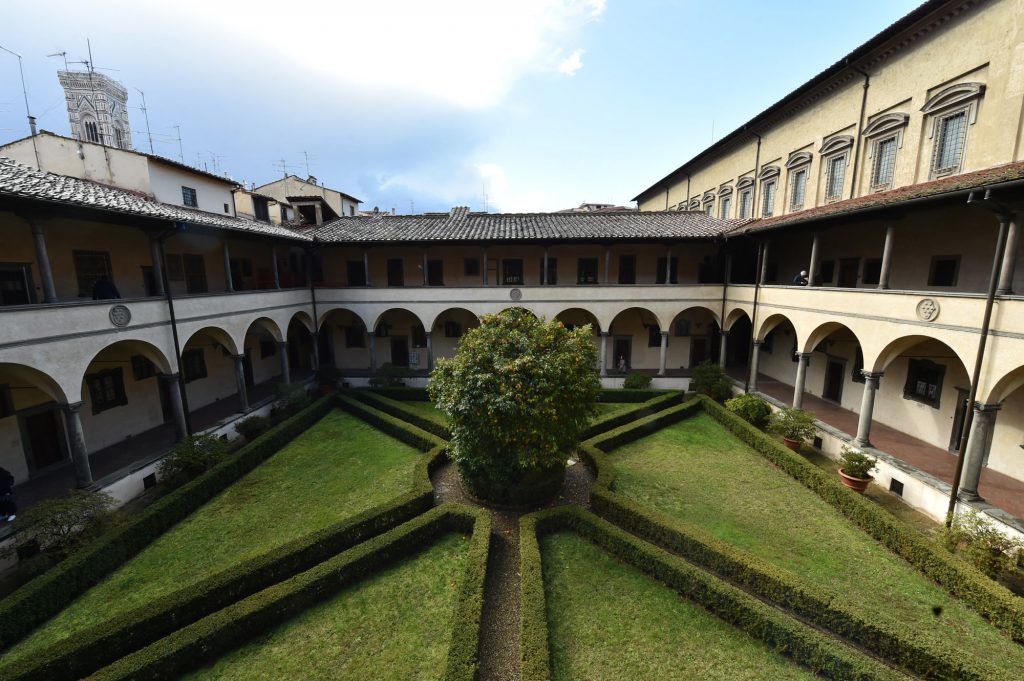 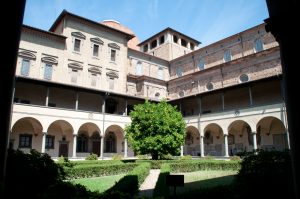 THE TREASURE OF SAN LORENZO AND THE UNDERGROUND

In the basement of the basilica, the recently restored environment once the seat of the Compagnia del Santissimo Sacramento, now houses the first nucleus of the San Lorenzo Treasure Museum where you can admire the splendid objects that over the centuries have constituted liturgical furnishings and precious reliquaries of the basilica.

In addition to the Museum of the Treasure, in the basement of the Basilica it is possible to see the burial of Giovanni di Bicci, the monumental tomb of Cosimo the Elder and a tombstone in honor of Donatello.

From December 2014, the basement was then enriched with a new room dedicated to the display of five tables with drawings by Jacopo 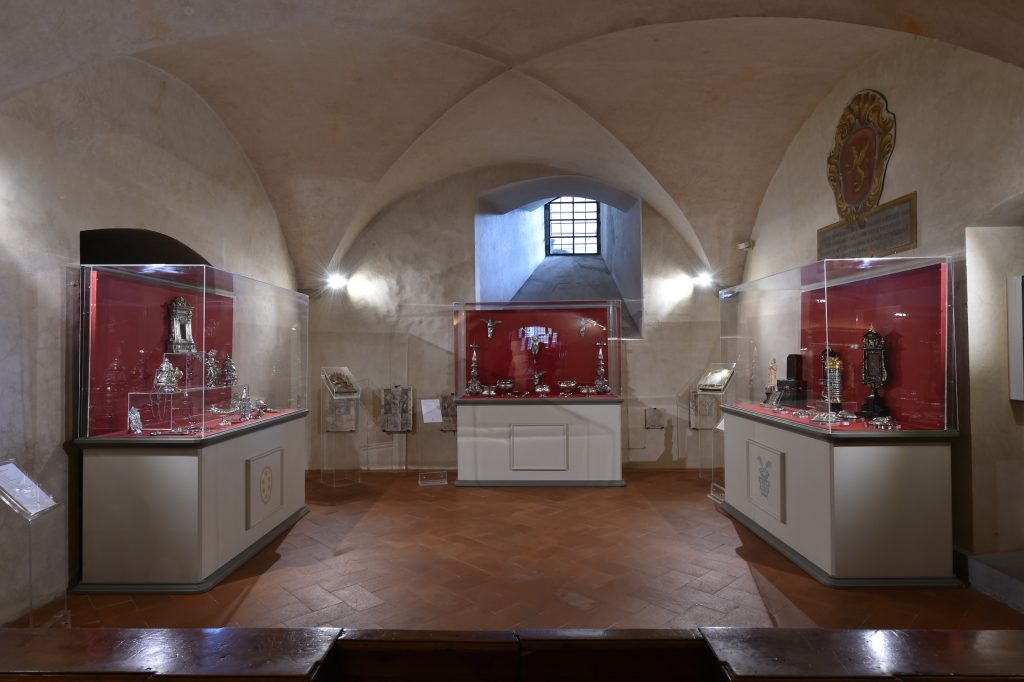 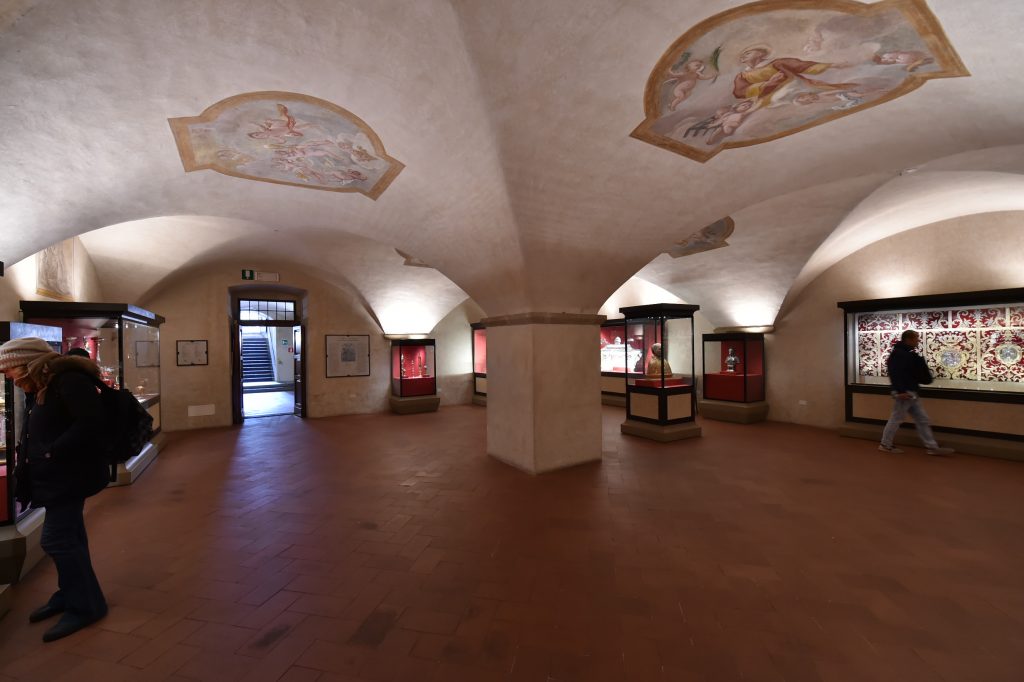 Giovanni di Bicci, founder of the Medici family, entrusted the reconstruction of San Lorenzo to Filippo Brunelleschi who directed the large construction site until his death in 1446.

The project was completed by his biographer and heir Antonio Manetti in 1461 and, despite some eighteenth and nineteenth century interventions, the Basilica of San Lorenzo still retains today the melodious vastness and the sense of perfect harmony that Brunelleschi had wanted to instill in it by virtue of the precise proportional ratios that regulate its structures.

According to the will of Pope Leo X, son of Lorenzo the Magnificent, the basilica should have been worthily completed by the marble facing of the facade. In 1518 the Pope entrusted the task to Michelangelo. Many drawings and a wooden model exhibited today in the Museo di Casa Buonarroti can give us an idea of ​​the magnitude of Michelangelo’s project which was never built.

Do you want to visit the Basilca di San Lorenzo Complex?
Find out all the visit information

Audio guide app?
Find out below..

Audio guide app of the Basilica of San Lorenzo

At the moment the app is available on the playstore.

The app provides information and audio guides of the main points of interest and works of the Basilica, the Underground and the Cloisters

The audio guide on your smartphone

The audio guides are also available in a downloadable version, to have all the visit information directly on your device in complete safety.

“If you had not had a body God would have granted you invisible and naked gifts but since your soul is united to the body it is through the sensible things that he bestows spiritual things on you”
S. Giovanni Crisostomo (Omelie su Matteo 82,4)